Rainbow Club first came into our lives in early 2017 when we joined the waiting list for its much sought after services, shortly after our daughter (then aged 5) had received a diagnosis (privately!).  We stayed on that waiting list for nearly a year before I got a call in March 2018 from Karen O’Mahony CEO, to say that a place was now available for our daughter in one of the Monday afternoon groups in Rainbow Club. 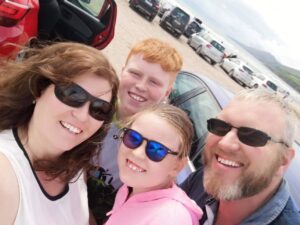 That phonecall brought such huge relief for me as by that time (March 2018) my daughter had been discharged from the care of the North Lee Early Intervention Team where she had been provided with Speech & Language Therapy; OT; Psychology (for us both), and Physio. When my daughter turned 6 in February 2018, all that support ended with a bang!  The EI Team referred our daughter to the ASD Team at Bridgeway for assessment, but the waiting list was years long!

Our daughter was cautious and anxious when she first attended Rainbow Club, but that certainly didn’t last long! She loved going “upstairs” as she calls it! Every day in the week has a meaning or event associated with it, and Monday’s description was always “Rainbow Club!”  We have to travel a good distance to get to Rainbow Club, but the excitement and joy Club brings our daughter is worth every mile.

In 2017, we also applied for an Assessment of Need under the Disability Act so our daughter would be able to access the services of the HSE and continue to build on the strong foundations laid by the EI Team. Unfortunately, despite the strict time-frames set out in the Disability Act, it took a number of appeals against delay, and nearly 2 years before the AON was carried out, and our daughter was diagnosed with ASD – a diagnosis finally recognised by the HSE!

One hurdle overcome, only to meet the next… Bridgeway received the diagnosis, but effectively no services available as very long waiting lists.

Without the services our daughter receives from the Rainbow Club, I would hate to think where we would be now. Despite such a vast body of knowledge and research clearly evidencing the enormous benefits early intervention has for children with ASD, the State has failed our daughter by not continuing the good work of the EI Team. She has not received any services from the State since she was discharged from the EI Team….because she turned 6! That was nearly two and a half years ago.

We are, and forever will be, grateful to the Rainbow Club for what you do. Since I received that call in March 2018, our daughter has benefitted from attending social groups where she has made friends and is being taught important life skills such as the ability to take turns, and waiting. She has attended Play Therapy, Art Therapy and Speech & Language Therapy, and is on a waiting list for Sports where work will be done to improve her balance and coordination skills.

Rainbow Club also provides a lifeline for me personally. It is a group of mothers I can talk to, knowing that while we are experiencing our child or children’s diagnosis in different ways and each child is as individual as we are, we are still kindred spirits and understand each other.  That hour while I enjoy a cup of tea and a chat in the cafe while my daughter is “upstairs”, is the break that revitalizes me again for the week ahead!  I have made some great friends at Rainbow Club and I’m sure I will make more as the years go on.

I have also benefited greatly from some courses for parents run by the Rainbow Club and learnt a lot of tips on how to help our daughter.

One aspect of the Rainbow Club that must be mentioned is the ASD Santa organised every Christmas. We have been so lucky to experience this the last two Christmases. We have tried other Santa experiences over the years, including those claiming to be sensory friendly, but nothing compared to the Rainbow Club Santa experience.  Last Christmas in particular stays with me as we have a particular photograph of our daughter and the sheer joy on her face is something to behold and not often seen to that level. Rainbow Club did that! All the volunteers understand the children; they just “get it”…and that makes all the difference.

Rainbow Club provides such an essential and necessary lifeline to so many children with ASD and their families, and yet it is not State funded. There is a very clear need for this service to receive State funding.  Our daughter is on a waiting list for HSE ASD services with over 2 years now with no progress or contact or services received at all..  in that same time, our daughter has received SLT, Play Therapy, and Art Therapy from Rainbow Club.. state funding is needed urgently so the Rainbow Club can continue the amazing work you already do!

Our daughter has a co-morbid diagnosis of dyspraxia and would benefit greatly from the intervention and expertise of an OT.  I believe the State should fund such a post within Rainbow Club considering the fantastic work everyone involved in the Club is already doing. Other disciplines should also be funded – they are all needed.

Rainbow Club are willing to provide these essential services and help children with ASD and their families any way they can – so please help them!